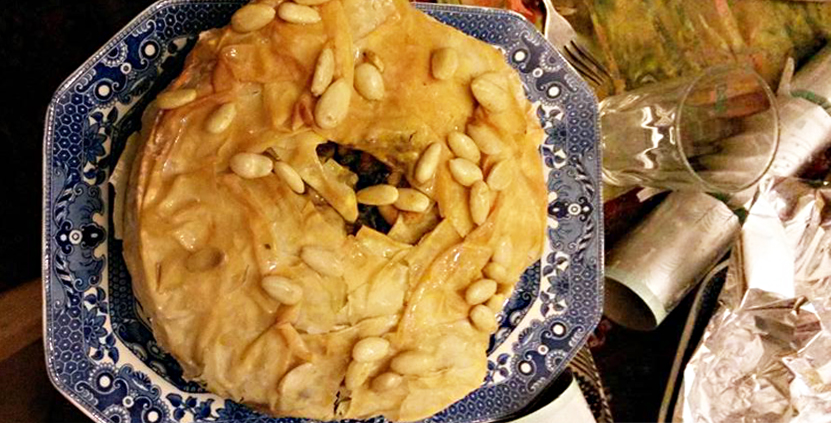 2 tsp each coriander and cumin seeds

1 tsp paprika, plus extra for dusting

900g squash, peeled and cut into small chunks (about 2cm)

400g can chickpeas, drained and rinsed

For the harissa yogurt sauce

Method
1. Preheat the oven to fan 180C/ conventional 200C/gas 6. Dry fry the seeds briefly in a small pan over a medium heat until toasty – don’t let them burn. Grind coarsely using a pestle and mortar (or a bowl and the end of a rolling pin), then mix in the paprika, cinnamon, 1⁄2 tsp salt and 4 tbsp oil. Tip the squash into a roasting tin, pour over the spiced oil and toss. Roast for 20 minutes.

2. Meanwhile, heat 2 tbsp of oil in a frying pan, add the shallots and cook, stirring, until they start to brown. Stir in the ginger and 100g/4oz each almonds and pistachios.When brown, toss in the cranberries, 2 tbsp honey, and the spinach so it wilts. Take off the heat and stir into the squash, when it comes out of the oven. Set aside.

3. In a food processor, whizz the chickpeas with the garlic, cumin, remaining oil, lemon juice, 2 tbsp water and salt and pepper to make houmous. Stir in the coriander.

4. Melt the butter in a small pan. Put a loose-bottomed 28cm quiche tin on a baking sheet and brush with some butter. Keeping the filo covered with a damp cloth so it doesn’t dry out, lay one sheet over half of the tin so that it hangs over the edge by about 10cm. Lay another sheet on the other side, so it overlaps the first in the centre and hangs over the opposite edge. Brush with butter. Lay two more filo sheets in the opposite direction in the same way and brush with more butter.

5. Build up two more layers in this way, so you use a total of eight sheets of filo. Pile half the squash mixture in the centre of the pastry. Spread over the houmous and then the rest of the squash mixture.One at a time, bring the edge of each filo sheet up to the centre to cover the filling, creating voluptuous folds as you go. Brush carefully with more butter. (If making a day ahead, cover now with cling film and chill. To reheat, remove the pie from the fridge, heat the oven, then bake for 35-40 minutes.)

6. Bake for 30-35 minutes, until crisp and golden. Just before the pie is ready, reheat any remaining butter in the pan, tip in the rest of the nuts and fry until golden. Spoon in the 4 remaining tbsps of honey and, when it melts, take off the heat and pour over the pie. Serve with Harissa yogurt sauce (mix the yogurt and milk together to make a thin sauce, stir in the herbs and season. Swirl in harissa to taste) and lemon wedges.