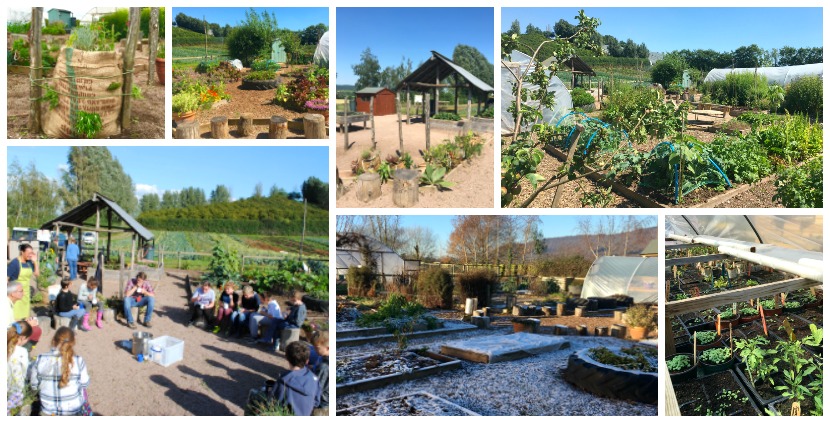 Our previous garden at Court Farm in Tillington was full of life year-round, with wonderful wildlife and herds of little people from our county’s primary schools wandering amongst the herbs, vegetables and flowers and grazing the tomatoes in our poly-tunnels.

During 2017 we developed a ‘plot box’ Field Kitchen, a converted and cladded shipping container at the side of our garden. Our kitchen was made possible by the generous donations of a surplus container from the nearby Credenhill Army camp, fabulous oak framed windows from Windowise in Hereford and all timber and cladding from Gibbs and Dandy also in Hereford. Plus donations of time and energy from our team of enthusiastic volunteers over the spring and summer.

Each Summer and Autumn we saw hundreds of school children pass

through our kitchen, making such tasty delights as Minestrone Soup and African Style Curry. Using all the produce from our Growing Local garden of course, our record so far has been thirty one veggies and herbs in a single soup pot!. More information on our schools Harvesting & Cookery Workshops here.

The story of our garden- In The Beginning-2009

Three of the four quarters developed-2012

The Development of the African Garden begins- 2013

First groups on the African Garden 2013

Growing Local is a Herefordshire Community Interest Company delivering cook and gardening education and events across the county to children, young people, families and adults.