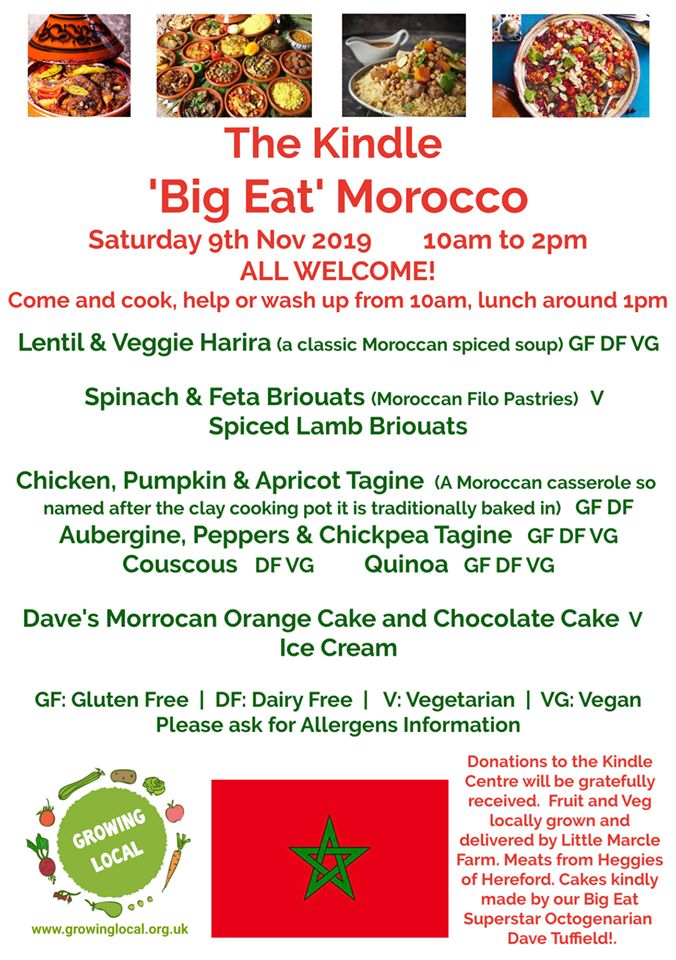 Wow , what a feast we enjoyed today! Here are the links to the recipes and a few notes as to the changes we made.

A traditional Moroccan lentil soup flavoured with cumin, turmeric,cinnamon and a little chilli. This version is vegetarian. Delicious with a sprinkling of coriander leaves and a squeeze of lemon, and a little chilli if you like a little heat

Briouats  are small Moroccan pastries which are stuffed with a variety of fillings, then fried or baked. Ours were  oven baked and filled with spinach, feta cheese, pine nuts and mint. They are typically made with fine layers of fine filo pastry and formed into mini cigar shapes or triangles.

These were also oven baked and filled with lamb mince( from Heggies butchers) pistachios, onion, egg , paprika, cinnamon and cumin. They were rolled in filo pastry brushed with butter.

Tagines are North African spicy meat, veggie and fruit casseroles so named after the clay cooking pot they are traditionally baked in.  For a vegetarian version omit the lamb and add more veggies. This does have a little heat to it; reduce the quantity of ras el hanout spice mix to lesson the heat. Ras el hanout is a Moroccan spice mix now widely available. Delicious served with couscous, bulgur wheat or quinoa.

Couscous is a staple food throughout the North African cuisines of  Morocco, Algeria, Tunisia, Libya and Israel. Couscous is made from a semolina flour derived from duram wheat and is technically a type of pasta, not a grain. It is traditionally served with vegetables and tagines which are a moroccan stew/ casserole.

Instant couscous is very easy to cook, simply steam it for a few minutes in boiling water!

Quinoa is an ancient grain crop originating from and and grown in South America ( Peru,Chile, and Bolivia), and nor North African at all!. For thousands of years, quinoa formed the staple diet of the Incas and their descendants.

It is pronounced KEEN-WAH

It is wheat free , gluten free and thus a great alternative to couscous, Bulgar wheat and pasta. for those following a gluten free diet. Packed full of protein it is a very healthy food to eat.

And the puddings.. so so delicious

This recipe uses xylitol, to make it a possible choice for diabetics.

Growing Local is a Herefordshire Community Interest Company delivering cook and gardening education and events across the county to children, young people, families and adults.